A Cultural Communication Project by the Agency for Cultural Affairs

Media Arts exhibition fusing traditional Japanese culture and technology to be exhibited at Haneda Airport and one other location starting Wednesday, January 19, 2022

TOKYO, Jan. 26, 2022 /PRNewswire/ — The Agency for Cultural Affairs, Government of Japan, launched an innovative cultural promotion project called “CULTURE GATE to JAPAN” at Haneda airport and the Tokyo International Cruise Terminal for its second year on January 19th 2022. This project, allows artists and creators active in the field of Media Arts to create works based on various aspects of Japanese culture and exhibit them at airports and cruise terminals to convey the appeal of Japanese culture.

Two installations will be on display at Haneda Airport. The first, “NEO-KAKEJIKU”, infuses traditional hanging scrolls with technology and in a modern interpretation, and the second installation is based on the theme of ‘fireworks’.

The Tokyo International Cruise Terminal will host “+A+” (pronounced “Plus A-Plus”), an exhibition of video works on the theme of the sea and the human heart, curated by TAKEKAWA Junichi  (a representative of David Watts inc.), known for his work as the Creative Director of MUTEK.JP.

The incorporation and blending of inherited traditional culture and cutting-edge technology can be highlighted as an allure of Japanese culture. We will exhibit Welcome Art installations at the airport, inviting visitors to experience and appreciate the confluence of traditional Japanese art with a wide range of contemporary Media Arts, including modern forms of entertainment such as manga and animation, as well as other art forms utilizing technology.

Hanging scrolls mount paintings and calligraphy on places such as alcoves and walls as decoration or to be appreciated. In this exhibit, we have added technology and modern interpretations to that traditional media to establish new manifestations. A monitor has been placed in the center area called the ‘honshi,’ which is usually adorned by a picture or calligraphy to play videos created by five artists who work in the realm of contemporary Media Arts.

Within the screen that resembles a hanging scroll, the artists and creators present the culture and allure of Japan using new perspectives and methods to greet and inspire airport visitors.

“Hanabi/Fireworks”, enchanting spectacles shared by many around the world, has taken slightly unique development path in Japan. Since 17th century, it has been evolving together with the local cultures in various regions throughout this nation and come to hold the cultural significance of the country. Artist, SHIMADA Sayaka, using this global yet local symbol “fireworks”, as the means of expression, explores the complex culture of Japan filled with the coexistence of concepts even in histories, philosophies, and aesthetics.

Historically, the fireworks displays are known to have contradicting meanings of “festival” and “memorial service/reposing the souls” and have thrived with both aspects. For this work, SHIMADA focuses on this dualism of the fireworks festival. She collects and analyzes the temporal and geographical data of all the fireworks cancelled in Japan through 2020 because of COVID-19 and creates the actual fireworks that evoke another world that could have been and to honor the lost festivals. The form of the exhibition changes in stages, starting from a video work of the production process and data simulations, and to the installation consisting of used tubes from the actual fireworks launch and filmed footage.

Not only as an artist but also as an award-winning fireworks designer, SHIMADA, envisions to create the world that contrasts the various aspects of fireworks by examining the historical and cultural backgrounds.

The archive of last year’s artworks will also be displayed on monitors and panels at FLIGHT DECK TOKYO on the 5th floor of Haneda Airport, Terminal 2, until March 21, 2022*.

*Please note that there is a possibility of the exhibition being relocated or suspended due to circumstances of the venue or the situation relating to the COVID-19 pandemic. Please visit the official website for the latest information.

*Tokyo International Cruise Terminal is currently closed in accordance with the policies of the Tokyo Metropolitan Government. The exhibition is slated to open at the same time the terminal is re-opened to the public. Please visit the official website for the latest schedule and other information.

While looking out on the sea from Tokyo International Cruise Terminal, in the drifting of the waves that move closer and farther away without ever ceasing, as creators we feel ‘time’ that is measured by a different scale than the hours of human society and imagine new interactions of the spirit within ourselves and others.

+A+ (Plus A Plus) is an exhibit that uses sound and images to appreciate the ‘world’ of +A+, an imaginary code that connects to the port. ‘A’ represents the process of cultural and artistic activities in which ‘A’rtists express and ‘A’rchive the interaction between the existence of the port that encompasses encounters and traditions, and the sea that ‘A’dapts to the contexts of Japanese culture.

The three artists whose works are exhibited here take an introspective cultural view and capture this relationship of the human spirit and the sea as a self-centered world. The work invites you to a vista that touches the spirit, and marks a time that confronts essential questions as rolling waves that surpass the ages. At the Tokyo International Cruise Terminal, discover the ‘sea’ within your ‘spirit,’ and together with the view of Tokyo Bay, appreciate these new perspectives of Japan’s sea culture through artistic renderedings.

The creative team produces topical artwork in various media including TV, commercials, and music videos based on intense, energetic expression and impassioned, realistic illustrations. The high-speed picture–story show, “Safe Driving Guide” (2014) was chosen in the Jury Selections for the Entertainment Division at the 18th Japan Media Arts Festival. “Powder/New Tribe” (2019) was nominated for the TV and Commissioned Films category in the Annecy International Animation Film Festival. Since 2019, AC-bu is a visiting professor at KyotoUniversity of the Arts.

Creative Label nor is an art collective launched in 2017 by members from various backgrounds and includes scientists, musicians, architects, programmers, engineers, and designers. By utilizing technology to express natural phenomena as artworks, the group aims to embody the ‘sublation of science and art.’ The artwork, “dyebirth” (2017) that drips ink according to an algorithm was chosen in the Jury Selections for the Art Division at the 22nd Japan Media Arts Festival.

EHARA Saeko was born in Tokyo in 1985. She is an artist and a video jockey. After graduating from the Royal Academy of Art, The Hague (KABK) in the Netherlands, for over ten years she has been involved in the entertainment world, working in various stages, primarily in concerts, in roles such as video production and operation as a video jockey. She began her activities in earnest in Japan and abroad in 2020. Under the theme, ‘the unspoiled landscape in my memories,’ she creates artworks in the field of digital art. Her latest major activities include “MUTEK.JP” (2021) and “XRE’s Ars Electronica Festival Garden NYC Portal” (2021).

MIYAZAKI Natsujikei was born in Miyagi Prefecture in 1987 and is a manga artist. She got her start in 2010 with her first serial publication, “Yugata madeni Kaeru yo” (I’ll Be Home by Evening; Kodansha, Ltd.) in “Gekkan Morning Two” No. 40. “The News of Transformation” (Kodansha, Ltd., 2013) was chosen in the Jury Selections for the Manga Division at the 17th Japan Media Arts Festival. She depicts the swirl of intense emotions in everyday life through carefree designs.

Her books include “There’s Nothing Wrong with Me” (Kodansha, Ltd.), “To, Aru Hi no Sugoku Fushigi” (Something Really Weird Happened One Day; Hayakawa Publishing Corp.), and “Anata wa Bun-chan no Koi” (You’re Bunchan’s Love; Kodansha, Ltd.).

Nyamyam (UK) is an independent development studio comprised of three skilled game creators from Japan, the UK, and Germany who have a keen love of Japanese culture. “Tengami” (2014) is a puzzle adventure game that incorporates the texture of Japanese ‘washi’ paper, one of the traditional beauties of Japan, and the structure of pop-up books into its visuals. It won awards at SXSW 2014, IndieCade, SOWN, Develop Showcase, and Game Connection BIG Festival, and was chosen in the Jury Selections for the Entertainment Division at the 18th Japan Media Arts Festival.

NAGASHIMA Minori is an artist who works freely going back and forth between the fields of music and art. She graduated from TokyoUniversity of the Arts and Keio University graduate school. In addition to being involved in stage performances, fashion shows, and video productions as a composer and arranger, she also participates in the band, QUEEN BEE. She is also active as an exhibition and artwork director. In recent years she has played a key role in major art projects, such as “yorunoyo – YOKOHAMA CROSS NIGHT ILLUMINATION” (Yokohama City, 2020) and “JINTAI NETWORK SYMPHONY at THE BODY—Challenging the Mystery” (National Museum of Nature and Science, 2018). Her work includes music composition and acoustic design for those artworks.

SHIMADA Sayaka graduated from Nihon University College of Art Cinema Course and is in a doctoral program at TokyoUniversity of the Arts.

She presents artworks centering on films and installations. While a university student, she encountered fireworks and became fascinated with their energy. She also works as a fireworks show designer. She attempts to bring to light new realizations and issues by researching and reconstructing elements that compose fireworks, physicality, explosives engineering, and cultural and historical backgrounds across areas from a variety of angles.

In addition to fireworks, she also creates artworks on the motifs of natural elements such as fire, lightning, radiation, and water. She participates in fireworks shows in Japan and other countries as a fireworks director.

TAKIDO Dorita is a Tokyo-based artist and designer. She creates new hands-on experiences that disrupt the senses by combining different functions and senses. She builds portals to thoughts while pursuing technology and sophisticated designs side by side. She earned Honorary Mention at the Digital Musics & Sound Art of Prix Ars Electronica and was nominated for the 2017 Ars Electronica STARTS Prize for “Bug’s Beat” (2017). “Slime Synthesizer” (2014) won the New Face Award in the Entertainment Division at the 18th Japan Media Arts Festival. She is active in Japan and internationally, with her work having been exhibited in Singapore and the Netherlands.

YOSHIGAI Nao was born in Yamaguchi Prefecture in 1987. She is a filmmaker, dancer, and choreographer. She directs, performs in, and choreographs videos, films, commercials, and music videos while addressing her own physical sensations and emotions. Her film, “hottamaru days” (2015) won the New Face Award in the Entertainment Division at the 19th Japan Media Arts Festival. She appeared in and choreographed the music video for YONEZU Kenshi “Lemon” (2018), and her film, “Grand Bouquet” (2019) was officially screened at the Cannes Film Festival in the Directors’ Fortnight.

TAKEKAWA Junichi was born in Shinjuku in 1972, and is the representative of David Watts Inc. He primarily works in Tokyo and Kanagawa. He creates moments that give rise to human creativity as experiences that discover links between art and technology that transcend space and time. He is constantly searching for new firsthand experiences through comprehensive planning and staging projects across industries and businesses that differ in thinking. He is director of the General Incorporated Association PEACE NIPPON PROJECT that conducts activities to communicate the beauty of Japan as a message for the future. He is also director of the General Incorporated Association MUTEK Japan and creative director of MUTEK.JP, the only electronic music and digital arts festival in Asia.

The Agency for Cultural Affairs, Government of Japan, launched an innovative cultural promotion project called “CULTURE GATE to JAPAN”. The project is a series of art installations held at Haneda Airport and Tokyo International Cruise Terminal. The participating artists and creators active in the field of Media Arts exhibit artwork inspired by the unique culture of each area of focus in Japan with the goal of communicating growing a broader appeal around Japanese culture. 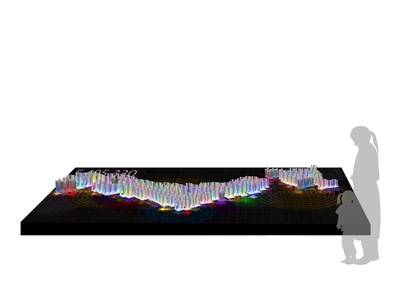