To read all contents from this site in english version, please click on english flag above, or click here…

PADUA HISTORY Probably better known as the city of St. Anthony or as the economic capital of Veneto, Padua is one of the most important Art Cities in Italy. Its face is marked by 3000 years of history. Founded as a fishermen’s village, in the 4th century BC. it became the most important centre of the Venetians.

Allied to the Romans against the Gauls and since 45 BC. a municipium, Patavium was one the most flourishing towns of the Roman Empire. Unfortunately, due to the destruction of the town by the Longobards in 602, we only have few remnants of the Roman Era: the ruins of the great Amphitheatre, some bridges and the precious evidences which are still preserved at the Town Museum. Its recovery was very slow. In 12th century Padua is a free Commune: during the two following centuries it knows a quick development and with the Seigneury of the Carrara family (1338-1405) it reaches the height in its political power, expanding its domination to a large part of central Veneto.

It is a period of extraordinary economic and cultural ardour that left an indelible mark on the town: the Mediaeval City Walls, the great civil and religious buildings, the foundation of the University (1222), the second in Italy, which attracts masters and students fro the whole Europe. The art panorama is dominated by the figure of Giotto, leaving in Padua his masterpiece, the decoration of the Scrovegni Chapel; but the great Florentine master is followed by Guariento, Altichiero, Giusto de’ Menabuoi, who leave wonderful cycles of frescoes.

The enlightened Seigneury of the Carrara family terminates in 1405: Padua is incorporated in the mainland dominions of Venice. But the artistic primacy continues during the first half of the 15th century, thanks to Donatello and Mantegna.

In the 16th century, under the government of the Serene Republic, Padua knows a great renewal. The town is surrounded by a formidable ring of walls and bulkwards that establishes the definitive urban shape. New buildings and solemn churches rise up; the University goes through a period of great splendour: Galilei, amongst other, teaches here.

The magic scenography of Prato della Valle rounds off, at the end of the 18th century, the four centuries of Venetian domination. Padua passes to Austria until the annexation to the Kingdom of Italy (1866). In spite of the destructions due to wars and of some disrespectful of the environmental goods interventions, Padua conserves almost uninjured its unique urban structure: a tangle of narrow streets with arcades and of monumental squares, of humble houses and of imposing buildings. This compact organism guards many wonderful treasures. To the clever visitor the task of discovering them.

Palazzo della Ragione. Built in 1218 by the Commune and raised in 1306, in a daring piece of work, by Fra’ Giovanni degli Eremitani, who added the loggias and the magnificent keel-shaped roof, it was the seat of the City Courts. The upper floor is occupied by a single hall (81 x 27 m.; 27 m. high), one of the largest hanging halls in the world, called the Salone. The walls are entirely frescoed with astrological and religious subjects. The original decoration, traditionally attributed to Giotto and to his school, was destroyed in a fire in 1420 and remade by Nicolo’ Miretto and Stefano da Ferrara (1425-1440). The hall keeps a huge wooden horse, which was built for a joust in 1466. The Salone dominates the two large Erbe and Frutta squares, seat of picturesque and busy daily markets.

Scrovegni Chapel. It strikes the ancient Roman Amphitheatre (the Arena) and holds, entirely preserved, the celebrated frescoes by Giotto , the most complete cycle produced by the great Florentine painter (1303-1305), on the greatest monuments of figurative art of all time. In the nearby Town Museum, fitted out in the former Augustinian Hermits monastery, one can admire more celebrated works of art dating back to the 14th century. Amongst them: the Crucifix by Giotto and the Armed Angels painted on wood by Guariento and a great collection of Venetian paintings from the 14th to the 17th century. 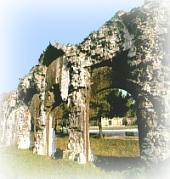 Eremitani Church. Built at the turn of the 13th century, the Augustinian church has a wonderful wooden ceiling, due to Fra’ Giovanni, and many monumental tombs.
Badly damaged by bombing in 1944, it was restored after the war: unfortunately most of the frescoes that decorated the church were lost. In the Presbytery still survive, partly recovered, the frescoes by Guariento (1368-1370). In the Ovetari Chapel, which was entirely frescoed, there remain the Martyre of St. James and the remnants of the Martyre of St. Christopher, juvenile masterpiece by Andrea Mantegna (1448-1457). 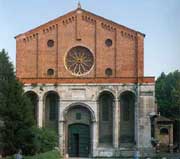 St. Anthony Basilica. . Started immediately after the death of the Santo (1231) and completed at the beginning of the following century, it is an imposing construction in Romanesque-Gothic style, with eight domes and spires of eastern inspiration. It holds the body of St. Anthony and is the object of pilgrimages from all over the world. Among the numberless works of art it keeps, one must point out the frescoes by Altichiero and Giusto de’ Menabuoi (end of the 14th century); the Crucifix, the statues and the bronze reliefs of the High Altar, superlative work by Donatello (1444-1448); the Altar of the Saint and the Treasure Chapel. Near the Basilica rise the St. George Oratory, holding a great cycle of frescoes by Altichiero (1379-1384) and the School of the Saint, that keeps three famous frescoes by Titian (1511). In the square stands the bronze equestrian monument to the Gattamelata. , Donatello’s masterpiece, completed in 1453. Besides the Basilica in the via Cesarotti, the Loggia and Odeo Cornaro, magnificent work by G.M. Falconetto (1527). 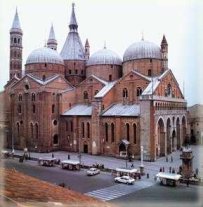 Walls and Gates. The first walls, built during the Commune eve, ran along the Bacchiglione and the navigable canals, delimiting the ancient Roman "island". There are only few remnants of them, by which two of the 19 gates: Altinate Gate and Molino Gate.

New stretches of walls built during the Carrara Seigneury, to include the urban spreads beyond the Roman island and large horticultural lands. The town, due to its strategical importance, was fortified by the Serene Republic of Venice with new walls, which were built between 1513 and 1544. The defensive work, about 11 km in length, includes some twenty formidable bulkwards still well kept. Particularly interesting from an artistic point of view are Venice or Portello Gate. , built in 1519 according to a design by Guglielmo Bergamasco; S. Giovanni Gate (1528) and Savonarola Gate. (1530), both fine works by G.M. Falconetto.

Bo Palace. This large group of buildings, erected between 1542 and 1601, around the mediaeval inn of the "Bo" (the Ox), has been rearranged several times and with modern additions from 1920-1940, is the main seat of the University, founded in 1222. Particularly interesting are the Old Courtyard (mid 16 century), masterpiece by Andrea Moroni; the Room of the Forty, with Galilei’s chair, who taught in Padua from 1592 to 1610; the Aula Magna, rich with coats of arms and decorations; the famous Anatomy Theatre. by G. Fabrici d’Acquapendente, the oldest in the world (1594). The other Academic Rooms contain frescoes, curios and old and modern works of art.

Piazza dei Signori. The large square, seat of a picturesque market, is closed to the western end by the Palazzo del Capitanio (late 16th century), which includes the old Clock Tower, with the great astronomical clock, conceived by Jacopo Dondi in 1344 and remade at the beginning of the 15th century. The Triumphal Arch is due to G.M. Falconetto (1532). At the southern end raises the Loggia della Gran Guardia, which was built in Lombardesque style according to a design by Annibale Maggi (1496) and completed in 1532 by Falconetto. Past the Arch, in the wooded Piazza Capitaniato, stands the modern Liviano building, home of the Arts Faculty, which holds the large hall of the ancient Carrarese palace (called the Giants Hall) entirely frescoed at the half of the 16th century.

Prato della Valle. The traditional site for fairs and entertainments (underground the remnants of a Roman theatre) was reclaimed in 1775 by Domenico Cerato, by order of Andrea Memmo. It is a square of great scenographic appearance, decorated by a canal with four bridges and by 78 statues of famous men.

St. Justine Basilica. Imposing church built by the Benedictine friars in 16th century, on the site of early places of cult (it keeps the remains of the old early Christian basilica back to the half of the 6th century). The solemn interior contains many fine works of art, of which the Martyre of St. Justine by Veronese (1575). 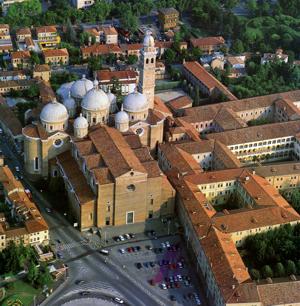 Botanical Garden. Founded in 1545 as the Simple Garden (medicinal plants) of the Medical Faculty of the University and laid out by A. Moroni, it is the oldest botanical garden with didactic aim in the world. It holds an extremely important collection of rare plants. 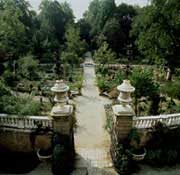 Battistero del Duomo. The Romanesque Baptistery (1075), named after St. John the Baptist, holds the finest cycles of frescoes painted by the Florentine painter Giusto de’ Menabuoi in 1375- 1378. The cycle begins with the wonderful Paradise and continues with the stories of St. John the Baptist, the Stories of Mary, the Passion, Death and Resurrection of Christ. Round the altar in 43 decorative squares are depicted the events prophetically presented by the Apocalypse of St. John the Evangelist. The plan is square-shaped, with the high circular drum of the cupola, a small portico and another cupoletta. It is decorated with arches and pilaster strips.