BAODING, China, Oct. 21, 2022 /PRNewswire/ — On October 17, ORA, the fashionable “Pure Electric Brand” of the car manufacturer GWM, launched its first model in the European market at Paris Motor Show 2022, marking its entry into the mainstream market in Europe amid a broader global expansion. 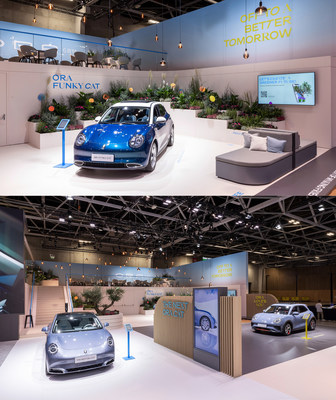 In response to the trend of electrification and intelligentization, GWM launched ORA as its first new energy vehicle brand. ORA demonstrated three models at the Paris Motor Show 2022. Among them, ORA GOOD CAT (namely FUNKY CAT in the European market), the model awarded the five-star rating of Euro NCAP, was officially launched in Europe and will be available in the UK, Sweden, Germany, Israel, and Iceland soon.

Europe is one of the regions with the most developed automobile industry in the world and the market access regulations for vehicles are quite stringent. Since 2021, ORA, making full of GWM’s complete industrial chain and R&D as well as production strength, has begun its journey in Europe.

At IAA Mobility 2021, ORA introduced its European strategy that the brand would make a global debut for more than 10 models in Europe by 2025. This year, ORA participated in the Fully Charged Show in London and EVS35 ï¼the 35th International Electric Vehicle Symposium & Exhibitionï¼in Norway, attracting much attention from local users.

Also, ORA made public its ORA APP in Europe and established a European experience center in Germany, providing access to conduct in-depth communication with users. The design of the experience center won the Silver of the “2022 German Brand Award” from the German Design Committee.

At present, GWM ORA is accelerating its layout in the market of Oceania, the Middle East, and other regions and it also promotes the globalization layout actively.

As Rebecca Grajecki, Director of Brand and Marketing GWM Europe said at the Paris Motor Show 2022, “ORA will be going global and provide digital, intelligent, and entertaining products and services. It will become the intelligent companion to accompany its drivers through their adventures, making unforgettable memories and driving them to a better tomorrow – a cleaner, brighter future with infinite possibilities.”

Jacobs torna in pista e vince i 60 metri a Lodz