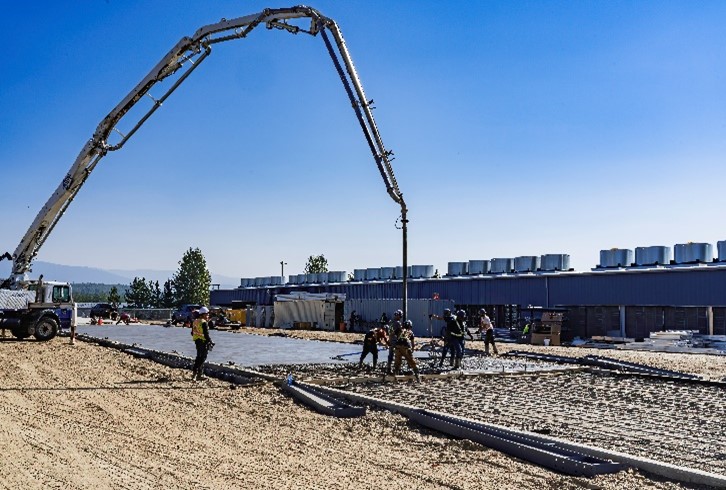 On September 23, the Company entered into an agreement with B. Riley Principal Capital II, LLC (“B. Riley”) pursuant to which the Company has the option, but not the obligation, to sell up to US$100 million of ordinary shares to B. Riley over the next two years.

The Company continues to monitor funding markets and advance prospective capital opportunities. In parallel, the Company is also assessing various growth initiatives such as ongoing organic expansion as well as potential M&A.

Canal Flats has been powered by 100% renewable energy since inception.3

Mackenzie has been powered by 100% renewable energy since inception.3

The project achieved average monthly operating hashrate of 1,579 PH/s in September compared to 1,380 PH/s in August, reflecting a full month of operations at 50MW.

Upon completion of the final phase at Mackenzie, 80MW of proprietary data centers are expected to power up to ~26,000 Bitmain S19j Pro and S19j miners4 (already under contract), generating 2.5 EH/s of operating hashrate.

Prince George has been powered by 100% renewable energy since inception.3

On September 27, the Company announced the full energization of 1.4 EH/s (50MW) at Prince George. The project was delivered on schedule and has been performing consistently since completion.

The Company is planning the build out of an initial 40MW development at the 600MW Childress site.

All required construction permits are in place and earthworks continued during the month for the substation area, the first data center building (20MW) and internal road network. Substation foundation preparations are also underway in readiness for scheduled transformer deliveries. Furthermore, purchase orders continue to be placed for key high and low voltage electrical equipment, building structures and data center equipment.

Key civil, data center building and substation contractors have mobilized to site and are being managed by a core group of Iris Energy employees based in Childress.

Iris Energy was one of the primary sponsors of the Mackenzie Senior’s Week celebrating seniors who have been recognized for their contributions and the impact they have had on the community. They were recognized through an appreciation lunch and an upcoming wine and cheese event.

A dinner was held in Childress to celebrate the successful recipients under the Company’s Childress Community Grants Program for 2022. Over US$85,000 is being awarded to 12 recipients including for the provision of safety equipment for the Little League, jackets for the disadvantaged, shade at a local playground, and chemistry class labs at a local high school. Iris Energy also joined the Childress Rotary Club (another Childress Community Grants recipient) to serve the community and partner with other local businesses.

Development works continued across additional sites in Canada, the USA and Asia-Pacific, which have the potential to support up to an additional >1GW of aggregate power capacity capable of powering growth beyond the Company’s 795MW of announced power capacity.

The Company’s average operating hashrate was 2,729 PH/s in September (compared to 2,204 PH/s in August), driven by the energization of 50MW at Prince George, with total Company operating capacity exceeding 3.7 EH/s from September 27 onwards. The corresponding increase in Bitcoin mined (325 vs. 301 in August) and electricity costs ($2.9 million vs. $2.4 million in August) were also primarily attributable to full energization of Prince George during the month.

* Reflects actual recorded operating power usage and hashrate (not nameplate). Note: nameplate capacity is higher than actual operating power usage due to features of the Company’s proprietary data center design which utilizes variable speed fans to reduce power consumption during cooler months, as well as the Company maintaining a buffer within its infrastructure capacity that can be also directed to other site uses (e.g. in-house fabrication shop at Canal Flats is currently operating as Iris Energy has the advantage of saving time and costs by internally constructing certain components for its expansion sites).

Iris Energy is a sustainable Bitcoin mining company that supports the decarbonization of energy markets and the global Bitcoin network.

These forward-looking statements are based on management’s current expectations and beliefs. These statements are neither promises nor guarantees, but involve known and unknown risks, uncertainties and other important factors that may cause Iris Energy’s actual results, performance or achievements to be materially different from any future results, performance or achievements expressed or implied by the forward-looking statements, including, but not limited to: Iris Energy’s limited operating history with operating losses; electricity outage, limitation of electricity supply or increase in electricity costs; long term outage or limitation of the internet connection at Iris Energy’s sites; any critical failure of key electrical or data center equipment; serial defects or underperformance with respect to Iris Energy’s equipment; failure of suppliers to perform under the relevant supply contracts for equipment that has already been procured which may delay Iris Energy’s expansion plans; supply chain and logistics issues for Iris Energy or Iris Energy’s suppliers; cancellation or withdrawal of required operating and other permits and licenses; customary risks in developing greenfield infrastructure projects; Iris Energy’s evolving business model and strategy; Iris Energy’s ability to successfully manage its growth; Iris Energy’s ability to raise additional financing (whether because of the conditions of the markets, Iris Energy’s financial condition or otherwise) on a timely basis, or at all, which could adversely impact the Company’s ability to meet its capital commitments (including payments due under its hardware purchase contracts with Bitmain) and the Company’s growth plans; Iris Energy’s failure to make certain payments due under any one of its hardware purchase contracts with Bitmain on a timely basis could result in liquidated damages, claims for specific performance or other claims against Iris Energy, any of which could result in a loss of all or a portion of any prepayments or deposits made under the relevant contract or other liabilities in respect of the relevant contract, and could also result in Iris Energy not receiving certain discounts under the relevant contract or receiving the relevant hardware at all, any of which could adversely impact its business, operating expansion plans, financial condition, cash flows and results of operations; the terms of any additional financing, which could be less favorable or require Iris Energy to comply with more onerous covenants or restrictions, any of which could restrict its business operations and adversely impact its financial condition, cash flows and results of operations; competition; Bitcoin prices, which could adversely impact its financial condition, cash flows and results of operations, as well as its ability to raise additional financing; risks related to health pandemics including those of COVID-19; changes in regulation of digital assets; and other important factors discussed under the caption “Risk Factors” in Iris Energy’s annual report on Form 20-F filed with the SEC on September 13, 2022, as such factors may be updated from time to time in its other filings with the SEC, accessible on the SEC’s website at www.sec.gov and the Investor Relations section of Iris Energy’s website at https://investors.irisenergy.co.

Photos accompanying this announcement are available at