XUZHOU, China, April 11, 2022 /PRNewswire/ — XCMG (SHE:000425) has sent off three “XCMG Express” trains between March 28 to 30 from Xuzhou’s railway freight center, the largest batch export delivery via land carriage in 2022 to date, with a total of 150 containers and machinery equipment valued at over 50 million yuan (USD 7.86 million). 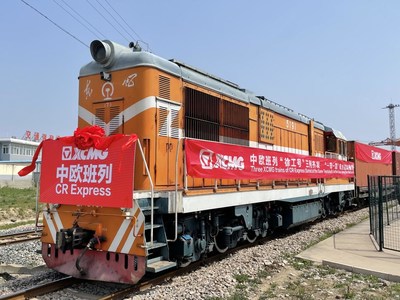 The “XCMG Express” to Central Asia and Europe is critically important to XCMG’s strategy in supporting the Belt and Road Initiative and expanding overseas businesses. Since the Express was first launched in 2015, it has given full play to Xuzhou’s advantages as a transportation hub and key city of the Huaihai Economic Zone and strengthened the development and ties of East China and countries along the Silk Road Economic Belt.

In 2021, despite the severe challenges of the COVID-19 pandemic, XCMG has achieved record-breaking export growths with revenue hitting the highest in history and first in the industry. The export of excavators in particular saw a 190 percent growth year-on-year, and the export of large-tonnage mining excavators increased nearly 10-fold and set the fastest growth rate across the industry internationally.

According to preliminary statistics, XCMG has dispatched more than 50 “XCMG Express” trains to deliver construction machinery equipment to destination countries and effectively alleviated logistics challenges. Customers in Central Asia, Middle East and Europe had been receiving the equipment they ordered within just one month.

Joseph Fulka Alexander, a customer from Uzbekistan, ordered XCMG excavators in mid-November, 2021 and received them in early December, and Alila Jean Marat from Kazakhstan received tower cranes within one month after placing the order.

“Under the influence of the pandemic, XCMG has fulfilled its promise and delivered the products in such a short period of time, I would definitely recommend and introduce XCMG to my fellow colleagues,” said Alila.